May 30th Monday
Imagine it! here am I in the Dover Express actually speeding away to Naples to meet Ell who is to arrive there the same day as I on June 1st. An early breakfast and start from Aldershot coming up by the 9.20 with my dearest who came to 11.0 at Victoria to see me off. It is a glorious day and we are hurrying through Kent with its hop gardens and fields of strawberries and fruit orchards, the country is looking lovely, fields are golden with buttercups and all the may is in full flower. I have a 1st to myself, and as breakfast was at 8.0 have just availed me of my tea basket and made myself some tea which was most acceptable. The excitement of going abroad like this is too wild for words. I have not been out of England since our honeymoon, 9 years ago this June.
Later: the crossing is over…and now it is about 5.30 and we have passed Amiens on the way to Paris. I have just been making more tea with which I regaled a travelling companion and self much to our mutual refreshment. Tea – what an invention it is, it makes a new man of one but the t.c. has a forbidding Mother with her and not being bold enough to ask permission to smoke I took the opportunity of doing so when I went to wash my cups in the lavatory! We get to Paris in about an hour now, and have just passed “Bass Pale Ale” – how odd! One doesn’t see French adverts on our rail sides at home.
Reached Paris and went round in the train to the Gare du Lyon, a most leisurely procession stopping in every siding and all the small stations on route, at length we arrived and I got hold of Cooks man who after I had had dinner put me into the Rome Express.

May 31st
Well as I write this we are rushing through the Mont Cenis Tunnel. It takes half an hour and atmosphere is just suffocation. We passed a pretty restless night the old man (who was sharing her compartment) and I. I say we because the poor one was bungling about so much changing his coat and his seat, moaning and mumping that there wasn’t much sleep for me! It is now about 12.0 as I write and we do nothing buy rush from one tunnel to another. The country is perfectly superb. It is getting pretty hot and I am longing to get into white clothes but the dirt in the train forbids it. I keep on washing but to no avail, each time one touches anything ones hands are black – as we pass each small station there stands the station “mistress” holding her trumpet and what looks like a telescope and when we stop anywhere were are not allowed to move until a blast is sounded, making a noise like a peacock. I want to take some photos on the way but I hear they are very averse to cameras in these parts so I have hidden mine for the present…we have just been to dejeuner, a real Italian meal and very good but it wasn’t the least pretty to see them shoveling in the spaghetti au tomates leaving long strings hanging out of the corners of their mouths!
(The train passed Genoa, and Wynne managed to exchange one compartment and man for another, who “sang, whistled, cleared his throat and spat!! but at 10.30 he got out and was replaced by a younger man, a gentleman and very polite so I passed a comfortable night and slept like a top until 5.0” They arrived at Rome at 7.0 the next morning, having been travelling now for two full days, and finally arrived in Naples for lunch.) 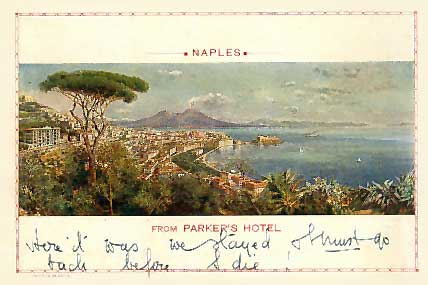 June 1st
Well at length this place Naples came in sight and Oh! the glory of it my Ell upon the platform! There are some moments in ones life upon which one looks back and then all seems to be unreal – this is how I feel about that moment anyway. Finding my luggage we drove up to Parkers (Hotel) where I washed and changed, had lunch and we then set forth to explore, first we took down to the Aquarium which is in the middle of the public gardens, a most interesting collection of live deep sea fishes and all sorts most beautifully kept. Then we strolled away into the town and had coffee in the Galleria Umberta and then just went and explored. My goodness what a town, and what slums! many of the streets are so narrow that they nearly meet over head…all have vegetable refuse and slops thrown into the middle of them much to the satisfaction of the straying fowl and dog. On either side are weird and greasy shops or rather dens, from which issue forth male and female horrors, swarms of children, animals and smells innumerable. 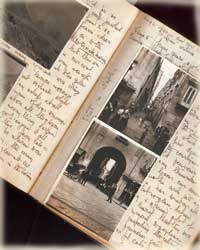 June 3rd, Friday
We arose at 6.0 at least I did and went and routled Ell out of bed at 6.30. We had breakfast served in my bedroom and then caught the electric train at 9.0 to Pompei. The dream of my life has come true – words cannot describe this absolutely glorious day. A brilliant sun shone and in an hours time we found ourselves with a guide at this most wonderful place. How I have enjoyed it and as one walked through the perfectly preserved streets and houses one could picture the gay city life, teeming with the highest civilization and culture. One could see the chariots driving along those curious streets, the scenes in the luxurious baths, the senate house, forum and theatre, the frescoes on the walls are perfectly fresh and several houses have been restored to such an extent and with such perfect care that one can imagine it and see it all before ones eyes; now alas the stillness is oppressive it is a veritable city of the dead and the haunt of bats and lizards, the latter are everywhere and dart about amongst the ruins…but what interested me as much as anything was the place where excavating is being carried on now, it is just outside the city wall where the tombs begin, we waited until the workman had gone to lunch and then we went down to a waste place and excavated ourselves, the place is full of hundreds of things, and I found the portion of a dog’s? skull, bits of pottery, fresco, glass and mosaic all of which I brought away. (Imagine doing that today!! and clearly from the he photos they had the place very much to themselves).

Up at 6.0 again and a day of glorious sunshine. Our expedition today was to Capri, and we caught the steamer at 9.0 passing Sorrento with its beautiful scenery on the way we arrived at Capri after 4 hours. (They went to the Blue Grotto, and then “to escape the vile crowd of Cook’s tourists we went up the hill and had lunch at Hotel d’Italie but were well sold for we had to ear cats flesh and water soup for which we waited about an hour and paid 2.50 each for!