April 1st
To my great and earnest delight, I got a letter today from Dearest by the second post, but its contents by no means cheered me up – his news was that he was off with Colonel Bosworth to the front. Of course it’s ripping for him by scarcely enjoyable for me…his letter was dated March 14 and since then I have seen Col. Bosworth’s departure mentioned in the Standard, then yesterday I saw Col. B. is reported to have died of heat apoplexy…all this made such a coward of me concerning Dearest…in his letter he said that “he” (Col.B)was in an awful fright at going and not at all suited to camping our in the frightful heat, being of such a size, and now the poor wretch is dead, it seems rather awful. 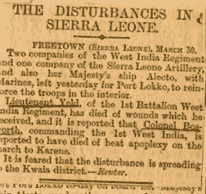 This local rebellion in Sierra Leone, against the imposition of a hut tax, a fiscal measure being imposed gradually in other parts of the African empire,was eventually repressed, but Charles was wounded, a bullet hitting him to the right of his nose and breaking two or three teeth. He recovered from this, and when he returned in May he gave Wynne a bent brass button that had deflected a second bullet. White still awaiting news, she was obviously unable to contain herself while talking to the family, and the relationship started to enter dangerous territory…

April 11th
The Mater and I had a long discussion about Dearest and I am afraid that my tongue proved slightly too loose…however I don’t think any harm will come of it. She was awfully nice about it but I don’t think that she understands the exact situation of things. Little did she know…

April 17th
I am sitting outside under the awning writing this and the weather is altogether too lovely for words, brilliant sunshine with the very lightest breeze blowing and a sky that simply makes you yell with joy, the birds are simply bursting their fat little throats with singing and the buds are just full of flowers and in fact the whole world seems too beautiful for words today, only all this simply makes me long, long, long for my Dearest. Oh! why isn’t he here to enjoy it all as well when I think that nearly, very nearly 4 months of the year have gone I just die with joy, no one knows how I long to see the one person worth seeing again, these four months have seemed twice as long as his two and a half years in Jamaica, it just shows what an awful minx I have become, aber es macht nichts!
I don’t believe I mentioned in this volume that we have given up all hopes of going to India again this year because of Father, so we shant be at Eve’s wedding and Ell is to be home in June or July, dear old man how I am longing to see him, it will seem just like old times.
There is a huge blackbird sitting on a tree quite close here singing such a song, and I can hear him say Char-ly, Char-ly quite plainly!

April 23rd
…frantic excitement…a letter from Dearest, a tiny scrap of paper, closely written in pencil which had got so rubbed that I could scarcely read it, but after much scrutiny with the magnifying glass I managed to make out: “Just a line to tell you I am flourishing and hope by the time this reaches you to be at S.L. and from there home again.”