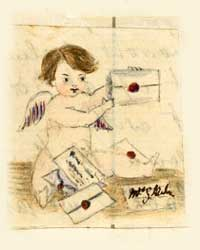 A letter from Dearest at last…just think that now I shall have him with me once again. Poor man he has had three teeth shot out and will have to go to town to have something done to the roof of his mouth, but they say he will have no evil effects from his wound but a scar on his cheek, which is rather nice than otherwise.

This is the last carefree entry. The diary breaks off between May 24 and May 31, and on that day she writes:
All I know about Wednesday and Thursday is that Mother and I fell out about Dearest’s letters and I told her straight out what I had discovered at the Norfolk Hotel in connection with one, well she was naturally furious and did not speak to me till Friday.

Wynne was sent off to stay with cousins in Wimbledon. It seems that what she discovered was that someone had opened and read the letter she refers to, just as the diaries were opened and read and sometimes even playfully tampered with. While there she picked up the paper and saw what she had been waiting for:

Friday, June 11th
The first thing I saw, this morning as I opened the Standard was – “Arrival SS Benguela – Liverpool”!!! Three cheers! Hurrah! So in a few days time I shall (DV) see my own Dearest once again – here soft music plays as no sentiments are allowed, I really cannot let myself go as I did on Sunday April 17th.
Nor could she…things were not in a good way, but a birthday and then a much more serious event intervened to prevent things developing for a bit….

Wednesday, June 15th
Day of Days! My birthday. I am 19 years old today! How ancient! Mother gave me a sweet little gold and turquoise brooch which had been Gran’s wedding present from Grandfather, and also Mum’s wedding present from Gran so I’m frightfully precious of it. Bogel (her father) gave me 5 pairs of lovely gloves from Pembethys, and I got from Adie (Maclean) the dearest little silver frame and an enormous box of chocolates from CWM besides two blouse lengths of pale blue and pale yellow crepon.

June 17th
Father not quite so well, and fidgeting about Ells return.
He had been unwell for some time, and a nurse had been employed. It is possible Elliot had been sent for from India because of his failing health. Blanche had gone up to London to meet her son.

June 20th
Dear old father is just alive and that’s about all, his strength is gradually going from him, and although he is quieter and free from pain he is almost unconscious.

June 21st
At last! After so many months of weary sickness, the dear one has left us and gone to rest. The end came at 9.30 last night, and he was unconscious all along. We decided that we were glad that Ell was not there to witness the last few minutes, as although he suffered no pain whatever it was painful in the extreme to hear him breathing, and not having been with him during his illness he would never have realized that no pain was being felt.
Ell arrived at 2.30pm and of all our trouble this was the hardest of all, the shock was awful, and he was quite distracted.

Wednesday, June 22nd
The very sweetest letter from “Dearest” today. My own dear old man. I have asked him to come to the funeral which is to be on Friday at 2.30.

June 24th, Friday (wrongly dated 23rd in her distress)
A terrible trying day is over thank goodness. The funeral was at 2.30 and there were crowds of people attending. All the morning it simply poured with rain and blew half a hurricane, but it just stopped during the ceremony…Dearest was with us and his presence was a great help, but I would not go through such a day again for words.

George Llewhellin is buried in the little churchyard at Tarrant Keyneston. His grave, still in remarkably good condition, lies behind the church. He was born on 20 March 1839.


June 25th…such a comfort to know that one is safe from callers, at least for the present…but Charles had come to the funeral, and was apparently allowed to consider himself close enough to continue visiting.

June 29th
The beloved Charles turned up today and stayed till after dinner, we spent most of the day par seul and were chaffed most frightfully in consequence…poor thing he is fearfully gone I’m afraid, even more so than I am.

Throughout August Charles continued to visit, but Winifred’s formidable mother was becoming more and more uneasy. The situation was not aided when it was discovered that their financial affairs were in a mess, and that their father had not left them enough to live on. Whether this led to the climax of the affair or not is hard to say, but in September, while Wynne was staying with friends, an ultimatum arrived: it was to be a final one