Wynne’s husband is now out in France, serving with the Seventh Division under Lieutenant-General Sir H. Rawlinson, and caught up in the chaotic defense of Ypres. When the two divisions (the 7th and the 3rd Cavalry) were withdrawn the newspaper report listed the survivors as being 44 out of 400 officers, and 2336 out of 12000 men. Wynne’s comment on the article she stuck in is:

December 20th, 1914. Sunday
Poor 7th, what times it has had and what desperate losses. I am writing my Diary a week at a time now partly because I have so little room left and partly because I simply don’t feel inspired, goodness knows there’s enough to write about and when this beastly war began I tried to follow it in this, but its too big a job and I couldn’t keep it up. Mother and Win came down on the 23rd in the kind Skippys’ motor. Our Xmas went off outwardly as usual, I made no difference for the children’s sake but it was a sickening feeling for me and I was thankful when it was over, how could one rejoice and sing Peace on Earth etc when there is nothing but strife and ill will throughout so many lands, and so many are in mourning…

However there was one silver lining. Unexpectedly, Herbert got leave to come home, and arrived on December 30th. 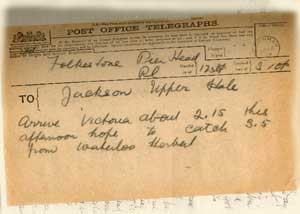 December 31st.
Much has happened these 4 days, Monday and Tuesday were spent in answering letters and sending parcels to my men and on Wed 30th as I was sitting writing a letter to Mabel I suddenly got this wire from H – it was then 4.15 and at 5.0 he arrived!! the whole house suddenly went mad!
I’ve certainly never been so glad to see anyone before and he is looking so well, it is a joy, such a ripping treat to have him back and we just sat and talked and talked till all hours. There was so much to hear and tell, he has brought home 3 cartridges – a French, English and German, also two neat little Pom Pom shells from his aircraft gun which being useless has gone back to store! another trophie (sic) was a box of matches bought at Ypres! Here also is the King and Queen’s Xmas Card to the troops, also those of the Rawlinsons to the 7th and 8th division and one from a flying Corps to H, all interesting mementos of these times. 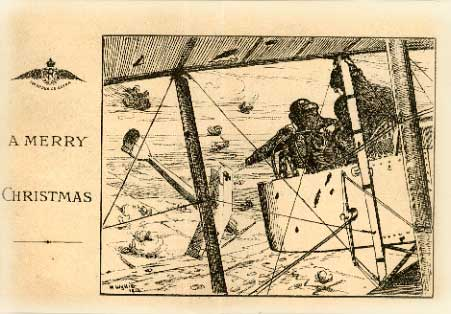 H has much to tell and its all so awfully interesting hearing it first hand. He tells us that Xmas Day was spent on their line in complete Peace. There was an early service in a little house to which a lot of them went, and during the morning an officer mending a telegraph wire called out “A Happy Xmas” to a German he happened to see who immediately came out of his trench followed by all the others and our men and they fraternised and hobnobbed all day long having lit up their trenches with lights and Xmas trees in some places. This peace with them was kept up all next day and then of course it all began again, how weird it seems that one day they should shake hands and exchange comforts and the next day shoot as many of each other as possible. There seems so little personal feeling against each other. 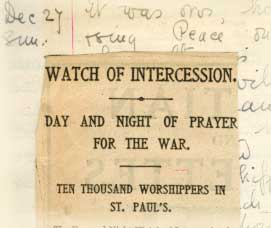 There were no decorations in the diary this year – unlike its counterparts of 1911, 12 and 13 it was uniformly bleak – articles about the war, and very different Christmas cards. Compare the ones on the next page to those you saw earlier!