The build up to Christmas in 1911 had started early, with the ritual stirring of puddings and the despatch of parcels to various corners of the world. Then the real work began – home-made being the order of the day…

December 12th, Tuesday
This morning my nice little friend Mrs Barnes came down at about 11.0 and helped me make sweets. I made lemon and chocolate creams whilst she did toffee, such lovely stuff and I have put them all away in tins against Xmas, then I got her to help me tie up crackers, glass balls etc and get some things ready for the Xmas tree which saves so much time.

December 13th
Miss Fitzroy and the Abbys came to tea. I am ashamed to feel that this is the first time the latter have been in the house since we came here. Miss F told us an awfully clever story about Lloyd George which is too good to be lost, in a speech down in Wales in his usual pious way of introducing scripture he said: “My friends Our Lord had 12 Apostles and none of them were Earls or sons of Dukes” No said a voice but one was a thief and a traitor and he was Chancellor of the Exchequer!! To Town tomorrow!

December 14th
At 9.30 having breakfasted at 8.0 we drove up to Town with Mrs Skipwith, she driving herself and so well. Sped off quickly to the stores where we lunched and shopped hard. H had then to go off to lawyers whilst I lingered revelling in the glories of the gorgeous book department. I then made my way in a taxi to my Club where I had tea afterwards walking over to the Kodak Co to get Win’s Brownie tank and some photo books for the collection I am going to make after Xmas, finally after much loitering and lingering and rubbing of my nose against every shop window I went home where we spent the evening gossiping and I working at a dress for my small Babylin. 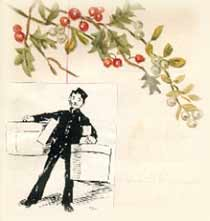 December 16th
Drove to Gorringe this morning to get the small things for the tree and stocking – 17/6 worth of rubbish! but they are fascinating. I only trust in this rush of Xmas that they will arrive in time, we sent Mother home from there and dashed off once more to the stores where we finished up our business and so home …coming home by 3.0 and getting in for tea, we found all well and 5000 letters and parcels awaiting us to answer and sort out.

December 22nd
The day began dark and gloomy and by midday torrents descended, at about 3.30 when a waterspout was coming down there arrived from Town in a motor Gran, Mother, Win, maid and 1000 parcels. We spent a very busy evening tying strings on things for the tree and pressing Mother into service for all sorts of Xmas jobs.

December 23rd
We get more and more busy as time goes on, everyone is in a titter and one has the breathless feeling that nothing will be ready! Mother and the children went off to the town this morning to shop and in their absence H and I assisted by Baby decorated the house, hanging bunches of mistletoe and holly in the hall and making the whole place like a jungle.

December 24th,Sunday
At tea which we always have en famille on Sundays in the dining room a delightful surprise occurred in the middle of that meal in came a tiny tree about 2ft high all lit up and hung with a present for each of us. This was Mother’s idea, and I was astonished I had lovely enamelled necklace really beautiful , H a gold pencil case, and the children and Gran other neat things – a quaint and pretty conceit – at night we filled the stockings and hung them up at the foot of the beds.