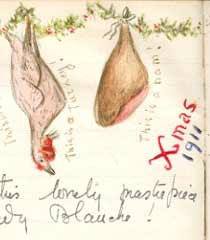 Very early this morning we were awakened by shrieks of joy and there appeared 4 triumphant children who all crept on to our beds armed with gouty and bonny stockings and there we held a Santa Claus parade great were the rejoicing when out of the usual pink paper wrappings there came apples oranges pencils balloons and the usual other mysteries which Santa Claus brings, they then all insisted on dressing in my bedroom and pandemonium reigned! We all went off to Church in the morning including Gran (aged 97) and Baby (aged 3), and Mother Gran and I stayed on to second service, as were were afraid of Gran having to stand waiting we all went and sat up in the chancel, she got through it all so well and after lunch we made her go and rest, we then set too and worked the tree was brought into the dining room and dressed, presents were arranged on all the tables and the dining table which was pushed to one side and at 4.0 when we had just finished the Barnes and Hurdwoods turned up to tea which we had in the schoolroom and at which we were 15, ourselves 4 Hurdwood the Barnes and little Charlie de Mornay, our Xmas cake this year was made by Joe with a centre piece by Fergus, a snowman made of almond paste, a most gorgeous affair! At 5.0 when all the servants had assembled the bell was rung and all being ready they trooped in each flying to its table and there being lost to the world. The tree looked most lovely this year it had a great deal of silver upon it and 6 doz. candles, sliver angels hair thrown all over it in single strands like rain and many coloured balls. The tree has a root this year and so we are going to plant it. We were 31 altogether including the men, their wives and children and each and all got armfuls of things going away rejoicing….

December 23rd, 1913
Ever since December 6 we’ve had the Waits (carol singers) on and off and not one worth listening to – only three or four rotten little children. 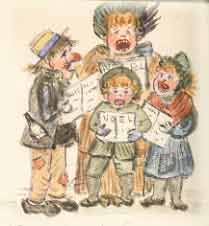 December 25th, 1913
At 4.30 we had tea and at 5.30 lit up (the real candles). According to custom the youngest in the house enters first after the bell is rung and so the dear Blokey, who came over with the Skippys, proudly marched in ahead and rushed to the tree as fast as her 18 month old legs could carry her, then followed all our crew. Dear old Gran was wheeled in before and sat beside her table of presents taking the liveliest interest in all and looking very sweet. Then came the servants, the men their wives and children and in all we numbered 32!

And of course, as always, after breakfast to church to hear a service that seemed to all present to have been around since time immemorial. “And Joseph also went up from Galilee out of the city of Nazareth into Judea, to the city of David, which is called Bethlehem….and suddenly there was with the angel a multitude of the heavenly host praising God and saying: Glory be to God in the highest, and on earth peace to men of good will…”