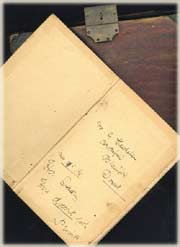 December 12 1895
Charlie is my darling! got a letter from the “Earl” – he said something too sweet for worlds I do think – he is the sweetest being on earth.

Young love at the end of the nineteenth century was just as tortuous and painful as it is today – though Winifred’s experiences now seem to have occurred on a different planet.

Her first serious relationship, with a young lieutenant, probably began as a childhood friendship. Towards the end of the century this friendship deepened into a genuinely powerful emotion, such that both started to look on each other as their intended.

As a near neighbour, Wynne would have met Charles Maclean before the diaries begin, but by 1895 it is obvious that she is fond of him. These first references to him occur in code, and use his nickname – The Earl. She used a code in an attempt to stop her prying family from teasing her.

On November 28th, 1895, the day before Charles is first mentioned – “I had the Earl’s letter this morning” – she had written:

We stirred the (Christmas) pudding today. I wonder if our wishes will come true – mine of course was the same as usual and does not come off till I’m 21 if ever!

The wish must have been every girl’s of that period. Even after she married, she continued to make lists of her friends’ engagements.

Charles was in the West India Regiment, stationed abroad, so Wynne continued to hear from him throughout 1896. However he does not seem to have dominated her thoughts. In August 1896, her father took her to Germany, where we find her writing thus:

We went to the station to see them off, there were many regrets and much weeping, especially on the side of Geoff who was far too overcome even to look out of the window!!! Then next day she records that “young Arthur Rose is very nice and amusing. I like him very much (I hope he won’t even get hold of this) he is 6ft 2ins and so good looking, fair and very determined to look at…”

But Charles was never superseded by these competitors. The glamour of Empire surrounded him, and on May 30th 1897 she heard he was returning, having been chosen to lead some men from his regiment in the Jubilee procession. He had been in Jamaica for two and a half years.