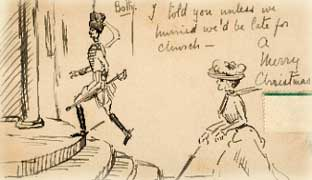 Winifred Llewhellin and Herbert Jackson were married on June 5th 1901.

Thomas Herbert Elliot, their first child, arrived on January 12th 1903.
Ysobel Evelyn was born the following year, on April 13th 1904, and their last child, another girl, Eleanore Mary, was born on 7th February 1908.

Thomas was sent off to school, as boys generally were, but both girls spent much of their youth at home with a governess. It wasn’t until much later that they were sent off to school – to Malvern Girls College. As explained elsewhere, they spent their lives burdened with nicknames, and in the diary entries you will only ever find them under these names:
Thomas was Pinkie, Ysobel was Nootie and Eleanore was Babs or Baby. Similarly Wynne often referred to Herbert as Poggy or Pogbag. She appears to have got off lightly, or omitted her own! 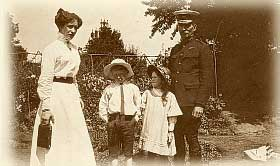 Herbert continued to serve in the army until his retirement in 1914. The couple managed a blissful holiday in Germany following this, only to return to the outbreak of war, whereupon Herbert was immediately recalled. He had to repurchase all his kit (this was not automatically provided in those days) and went off to the front very quickly.

War disrupted life, and it was not until 1919 that they were able to settle down again, and Wynne was able to indulge in her gardening passion. Then came the twenties, and the need to consider how to set Thomas up in a profession. After much consideration, Herbert took a huge risk, cashed in his pension, and took the whole family to Kenya, where his son Thomas had started to farm…and so this is where Wynne ended up.

Their moves were as follows:
1901 – living in Woolwich, near the Arsenal, at 53 the Common.
1904 – they moved to Aldershot, and then soon after that were sent over to Ireland. They were based in Kildare until 1907 (Eire at that time being a province of the United Kingdom).
1907 – Sheffield, living at 8 Taptonville. Wynne was not happy here, and luckily for her the family soon moved again, back to Wiltshire.
1907 (October) – Bulford Camp, Salisbury Plain – living in army quarters.
1910 – they moved into a nicer house near Aldershot: Upton Lodge, Upper Hale, Farnham.
1916 – at the height of the war, Wynne was forced to move down to Somerset, to a village she came to loathe. They rented a house called Hinton End, in Hinton St George, Crewkerne.
1919 – moved to Broughtons, Flaxley, Newnham on Severn.
1924 – final move to Kenya. 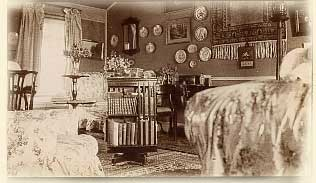