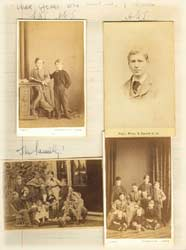 Herbert’s family originally came from the north of England – hence his middle name of Kendal, perhaps? At some stage, a branch moved south, and Herbert’s grandfather Jackson was a London agent (and possibly partner) for a West Indian sugar estate. This business collapsed when the partner, or owner, absconded with all the money, so the family were reduced to near penury. Herbert’s father, Thomas, was taken from school aged 14 and sent to a firm of stockbrokers as an office boy. Luckily for all concerned he made good, and married Caroline Jones, a ship-captain’s daughter. She bore him 13 children, 11 of whom survived. They had 25 grandchildren.

In the order they appeared, they were:
Thomas, who married Grace, a sister of William Orpen. 5 daughters and 1 son, Tom.
Charlie, who married Heather Parrott and had three daughters.
Fanny, married Gerard de Zoete but no children
Frank, married Mathilda de Zoete, sister of Gerard, but no children
Will who like his father went into the stock exchange but also fell upon hard times, married Louisa Stephenson. He had four children.
Mary – unmarrried.

Arthur, a parson , married Eva Styles and had five children: Kitty, Bob, Philip, Cecilia and Mark. They make many appearances in the diary.
Mabel, who married an artist, Hal Jones (largely so she could nurse him through his final years) and then became a missionary in Portuguese East Africa. She also appears quite a lot, and there are photos of her mission hut on the beach overlooking the Indian Ocean.
Landon, who was in the artillery, married Georgie, a “loud” Australian.
Edward married Dorothy Atkins, and had two daughters.

Herbert’s father died in1897, but the family made many visits to the Jackson home in Chelmsford, Springfield Place after Wynne’s marriage in 1901 . Here the indomitable Mrs Jackson ruled everyone with a rod of iron, and Wynne had to be careful where she smoked. However the visits there seem to have been very enjoyable, and one is described in the January entry for 1912.