February 13th, Friday.
It is just over three months ago since we left England. Much water has run under the bridge since then. The reason for the above date will unfold itself as this narrative proceeds. (Wynne had written nothing from the end of 1924. She had concluded with a description of their new property, which they all visited: “I was delighted with the look of the country over there, there are more trees than here and it is greener. Our land lies on the slopes of Elgon and there is a most glorious view of the distant Cherangani Hills. Maj T has been more than good to us…we are such an invasion in his bachelor household. On New Years Eve we played mad games at first and then they danced on the gravel by the lights of the motors to a gramophone! H and I escaped soon after 12.0 and left them to it.”)

In January they moved onto their property, using a house lent to them by the previous owners.
The house, a little wood and grass affair, was lent us by the Leonards, the man from whom we bought the land, and we amused ourselves by fitting it up to the last detail of completeness, also got the garden in order and were altogether most comfortable and fortunate. On Feb 1st the end came. The children and the L’s had gone to Elgon Club and Maj Tyack who was spending the day with us was just having tea before his departure when an accident happened to my little spirit lamp and alas set fire to the thatch. In less than half an hour the whole house was burnt to the ground. We were lucky to save a great deal but unfortunately many clothes got burnt after being thrown from the house and many a treasure has gone west (including Wynne’s precious fountain pen she had had since 1913, much used here. Below is a picture of the house they then had to move into!). 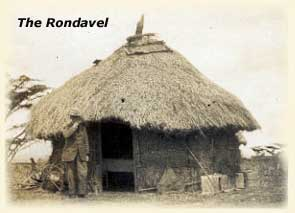 Something had to be arranged for our immediate accommodation. The Ls have lent us their rondavels where I and the two girls sleep, H and P do so in his and for 2 days we fed under the trees by which time a grass hut was erected. Matters were not improved by the kitchen going up the next day! a spark from the chimney. This time all was saved except the ‘kitchen table” which was a very nice carpenters bench lately purchased and the coffee grinder which one of our boys tried to remove with a hammer to its undoing!

Another kitchen was put up in a few days, a tiny affair and there with no table or any convenience whatever our cook continues to produce food. 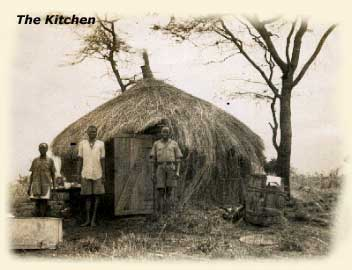 Almost everyone one meets out here has no good word to say for the native as a domestic. All I say is that experiences so far leaves little to be desired. We have four “boys” and a toto (child). The cook is a Christian and a Baganda, the head houseboy a Nandi, the other two a Nandi and a Kavaronda, and the toto a little Nandi. All through this trouble they have been resourceful, cheerful and continue their work without let or hindrance. I should like to see English servants under these circumstances. Thank goodness I haven’t the chance!
We are quite comfy in our little grass hut. Our table one we had made out here, and chairs were saved, and these we use. A meat safe to hold the crockery and a petrol box cupboard comprise our furniture not forgetting a row of sticks upon one side for our hats! I regret the little house awfully…we had manufactured curtains and coverings and furniture etc, laid down matting generally making it so neat and pretty, the garden too was sweet and now all is a blackened ruin. I am longing to get away and I think now it wont be long before we shall be able to move on to our land. We have now a gang of boys over there and they are to build mud houses for us, in which we shall live until such time as our house is built. Meanwhile the furniture from home strays about. Barnby from Cheltenham packed it all in six large cases much too broad for the ordinary ox wagon and we are having no end of trouble. 2 are here, 2 have got halfway and 2 are still at Eldoret. Kitale is our nearest store and P.O. and is 18 miles distant, Railhead is 60 and all heavy stuff has to come from there by ox wagon so transport is very slow.
It is a fine country. However at present it does not look its best being the dry season and much land is burnt nightly giving a general appearance of ruin! but the rains are expected this month and then all will be green again. There are evidences of flowers of all kinds, giant creepers and flowering trees and I think there will be much to interest one as time goes by. 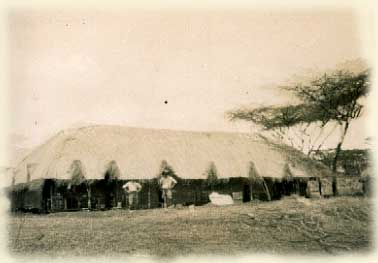 This was the next mud house they built…altogether on a grander scale. Though still fairly basic, it at least afforded them additional rooms and some privacy.

In fact Wynne was not to move into a proper stone-built house until October 1929, when their home was finally completed. On November 1st 1929 she notes: ” last night H and I slept in our new beds bought in Nairobi – most awfully comfortable and luxurious”. It had been a long wait…and she was only able to enjoy it for a little over a year and a half.