1924 was an unsettling year for Wynne and the family. For some time now there had been family conferences regarding their eldest, Thomas (Pink). Herbert and Wynne had decided that he had to be set up in some sort of business, either in India or Africa. The family had connections in both continents, but when Pink was sent out to check, he decided that neither India nor South Africa, where the family had planned to grow oranges, would be feasible. He much preferred the newly emerged Colony of Kenya, and so on the decision being reached, his father commuted his army pension, and put the whole sum into a property on the slopes of Mount Elgon, in the north of the country. It was an amazing gamble for a man of over 60 to make, entrusting his whole future to a dubious experiment growing coffee, on an estate run by a young man with very little experience.
The year was full of debate about this, and they packed up and left their rented house in Newnham at the end of March, going up to London where they remained until they left for Africa at the end of the year. While there they indulged themselves – theatres above all – and numerous visits to the great Empire Exhibition, which the King opened on April 23rd. They attended the May 24th Empire Day celebrations at Wembley (this is the stadium which was specially built for the event, and is now about to be demolished), and spent a lot of time exploring London, thinking they would not see it again for a long time. Finally on November 10th their last week arrived…Wynne’s mother was seen off on a trip abroad; farewells were said all round, most particularly to Wynne’s old governess, B. Scratchley, now living in Golders Green with a companion; endless bags and boxes were packed. They spent their last evening at the Co-Optomists, and then took the boat train to catch their boat, the SS. Norman.

Nov 13th, Thursday. 1924
We got on board at about 12.0 and made at once for our cabins. They are the usual pattern of these older boats, quite clean but tiny and I must say I am thankful for one of the many advantages married life brings one that is on this occasion a 3 berth cabin for it gives one a little extra room. We have unpacked our goods and chattels and our cabin now looks like a little wigwam. 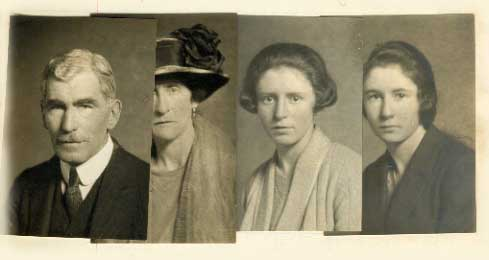 The above row of beauties are preserved here as an example of the flower of England, a pity that such elegance should be wasted upon the far deserts of Elgon, but in any case they should be useful for frightening away lion and other noxious beasts. I only know that if the Passport Officers pass us on these it wont be much of a compliment.

Nov 16th, Sunday
I am writing on Sunday evening having perforce had to miss out the whole of Sat. owing to a most vile 24 hours spent on my back. Oh! it was horrible, this vile Bay (the Bay of Biscay) has a bad name and certainly earns it, this old tub began its rolling on Fri. night getting worse and worse until the crockery took flight and masses of stacks flew hither and thither and I lay watching my clothes hanging in the cabin sway about until I turned to the wall in sick disgust. The poor girls were sick and utterly hors de combat till this morning when it became calmer and we all crawled up on deck. All today its been ripping and as we lay out basking in the hot sunlight one couldn’t realize that it was November and that our people at home were probably freezing in black rain and fog.

Nov 20th, Thursday
These last days have had to be missed out because the weather has just been one long roll….we have been hugging the African coast for some time, a gaunt arid wild looking land with occasional clusters of white adobe buildings , minarets and mosques, this afternoon we passed a huge sinister looking island which we learnt was the French convict island, a grim looking place where they apparently send their life sentences. At this time too we came upon a cargo boat carrying timber. She lay very low and her timber was stacked high up all along her decks, and the sea was washing completely over her at frequent intervals…
Our passengers are not an exciting crowd but there are a few nice people amongst them: Mr King and Mr MacMichael who sit at our table, Sudan folk and very pleasant, and Major Tyack who comes from the Elgon District.
I am hoping that after Port Said this frantic weather will cease.