I am having a new serge skirt made – dark blue and tight fitting made with hussar braiding on it like Mother. A green velvet blouse with a collar of macramé lace on it is coming tonight from the Dressmaker….

February 2nd, 1896
Bill and I went off to Westminster Abbey by underground. We got very good seats right amongst the choir so we were able to hear all right. After the service on returning to the station we found it closed until 1 o’clock so we had to walk up to Trafalgar Square where we got the bus right home. Of course we went on the top!! It was lovely, so nice being able to go out by ourselves; we saw a girl riding a tricycle in bags, it was just beastly, especially as they were rather tight.(First sighting of a woman in trousers?!)

May 23rd, 1898
Today I invested in such a smart pair of patient (sic) leather Oxfords, absolute dreams, also a very neat pair of brown kid, I am likewise getting a patient leather evening shoe and with my present good ones I ought to be quite set up. I am getting a new dress for every-day wear, it’s a blue serge bolero and skirt quite plain, so I think it will be very useful and neat. 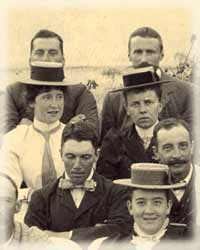 Danced every dance, and nearly died with heat, I had on my white dress which Edie kindly put her whole foot on and tore into shreds, and I was angry especially as she denied having done it. The Coffins looked very nice in white satin and the Crawfords in black with coloured roses.

January 5th 1899
I never saw anyone behave so badly as we did. Each dance I am ashamed to say Mr H made me cut another mans dance! After all he was so much the most amusing man there that it was worth it. I had on my black ball dress and of course it got torn.
(Wynne is referring to her dance card – at the start of each ball, men came up and booked a dance, which you wrote in your card. It was very bad form to then ignore someone you had agreed to dance with! and the really important booking was for supper, the three dances you can see below roughly in the middle. In this instance, her husband has booked her…the card is from 1908) 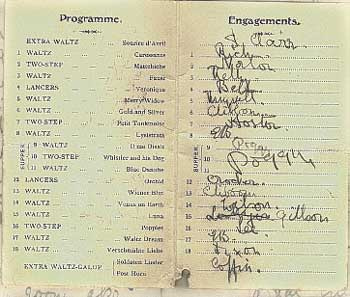 June 27th 1900
…(at a party)…the Croftons came in a host, they have two weird girls staying with them, Miss Harboyds, they might be described as painted ladies, the one is tall with pale and frousy hair which is tightly frizzed, on either side of a bun she stuck a pair of filthy old side combs of imitation tortoiseshell with most of the teeth out, to add to this super fatted head dress her face was tremendously painted and done up. The whole effect was scarcely pleasing. Her sister was the second volume, only rather a better edition.

June 5th 1901
Wedding
My 7 bridesmaids were quite charming to look upon, dressed in white and pink with large pink rose bouquets, the four older with black picture hats and the 3 younger white with pink roses.

(No record of Wynne’s dress exists, nor any photos. In those days, people enjoyed the event rather than spend most of the day recording it. Below is a photo of her sister-in-law’s wedding from around the same time, though its safe to say Wynne’s taste differed markedly from Mabel’s, and she certainly would not have worn a large hat like the one shown here. The groom is H.A.L.Jones, ARA) 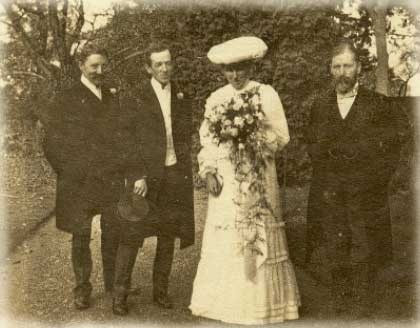