With the War nearly six months old, the pressures are growing. Depression and the flu attack Wynne.

Herbert is on leave so the family enjoy an outing to London: the panto and magic shows…but the time soon comes for his return.

Illness at home, and Wynne confides to her diary that she is feeling more and more depressed.

With her niece going off to school, and plenty of other chores, Wynne is kept busy, though Gran is becoming a big problem. 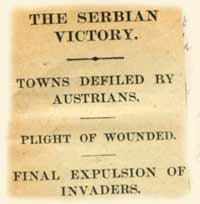 Wynne packs her son off to school and spends time with her cousin. Life quietens down but Gran’s situation worsens.

Spring, the Kaiser’s birthday, and various visits all noted…but Wynne is feeling poorly and goes to bed with flu without finishing the month.