On June 5th, after a tour of the catacombs and a church, they left Naples and came to Rome to the Hotel Continental, “a huge pile just opposite the station, a very well appointed house where beds are comfortable, food good, rooms small, servants leisurely and prices high.” They toured the Vatican on the 6th, Wynne writing reams about the statues and paintings, and ended the day “from the sublime to the ridiculous…by going to a very inferior music hall performance. They are singularly badly off over here in such things as theatres etc, but spend most of their time at the Opera.” Wynne explored the Capitol, Tabularium, Circus Maximus and Catacombs before hitting the Forum on the 8th. 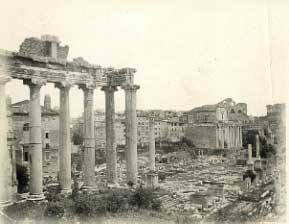 June 8th
Another early start and a drive to the Forum – my feeble and foolish words cannot express the wonder and the interest of this most wonderful place, the centre and heart of Roman civilisation where one sees the remains of five different periods: prehistoric, Kings, Republic, Imperial and lastly Christian. Late excavations have brought to light the stone cut tombs of the Etruscan period and there lies a huge skeleton in perfect preservation which measures about six and a half feet, then one is shown the black stone of Romulus upon which is a cypher no one can decypher, senate houses, rostra, basillicas, palaces all jumbled up together, the house of the Vestal Virgins was specially interesting with its courtyard surrounded by statues, its smaller compartments at one end and its room at another end containing a well and appliances for washing the sacred vessels – what a curious institution that was, to think that the power of these women was as great as the Roman emperors.
(She passed on to the Colosseum) – a subject of tremendous interest standing there century after century….we went off to lunch and returned afterwards again creeping up some ruined steps into the first tier and lay there absorbing it all until 3.0 our guide came for us again... 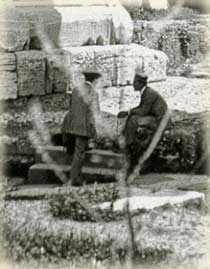 (and so on and on, visiting one site after another. You can see Ell on the right consulting with the guide. On June 9th in the evening they took wagon lits from Rome, leaving at 11.20 and arriving in Florence the next morning at 6.0, a journey that one could now do on the motorway in a few hours. Here they did the usual sites, and finally left on 12th at 12.0 travelling all day and night and reached Paris at 2.50 – on the afternoon of 13th).

June 13th
It has without exception been the dirtiest journey I have ever experienced, I never felt so unutterably disgusting as when i arrived here and could not breath with comfort until I had had a bath. All the way from Pisa one travel along the sea coast through a network of tunnels all of which are as foul as the underground used to be.
After a wash and tea we strolled out and did a little shopping and ended our day by going to see the famous Chanticleer, it is vertainly very clever and well done but I did wish i could understand a little more of it, I am very glad to have seen the thing which has created such a furore.

June 14th.
We are at the Continental and it reminds me of the jolly few days Mother and I had here 11 years ago (on their way to India). My goodness a lot has happened since then! Our whole day has been spent at the Salon, all the morning we inspected statuary…and then ahd lunch and went to the pictures where we stayed until closing time 6.0. We found many splendid battle pictures.

June 15th
Started at 9.50 for home and after a perfect crossing reached Town at 5.30, Wll went off to the Grand and I to my club. It was ripping to be with Ell on his home coming and at Dover even after a fortnight’s absence I felt as if I could embrace all the stolid Britishness I saw, their calm demeanour being so refreshing after the fussy and childish ways of the foreigners. What insular sentiments!! Ell dined with me and then we skipped off to the Palace where we obtained the last 2 seats in the house and saw the famous Russian dancers. (This was Anna Pavlova and Michael Mordkin in their first English appearance – you can see the programme in the previous page). They certainly are wonderful, I have seldom seen anything more inspiring or graceful, and am awfully glad we were lucky enough to get seats. 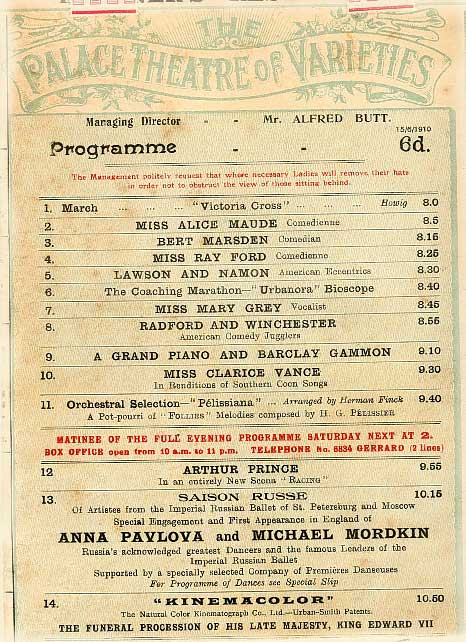