They continue their journey – following the route cut by L.D.Galton-Fenzi only a few years before them – he was the first man to drive between Nairobi and Mombasa. It took him 15 days, and from Voi to Makinnon Road a track had to be hacked from the bush. (Most people went up country on the railway). 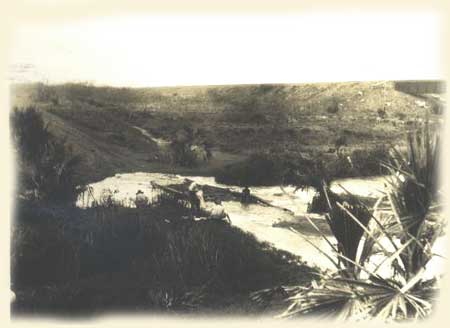 September 11th, Wednesday
Off again at about 9.30 having filled the visitors’ book with our signatures and ribald comments and for miles and miles we travelled the track cut through the bush by Galton Fenzi only about 2 years ago. Shortly after leaving Makindu we saw some buck and three giraffe quite close to the road after which we saw literally nothing. The road was rough but dry and the bush was dead, dusty and utterly arid, the only sign of life was an occasional settlement and a few natives who around here look as though they had been dipped in ink. One collection of huts we came across were like beehives built on piles, why piles in this waterless area? We had determined to lunch upon the other side of the Tsavo Bridge, that far famed much talked about obstacle. All unexpectedly we arrived there, and though we had been told that a new one was completed, luckily for us the water was low as no sign of the new erection was visible. We paused a moment on the brink and then plunged! In mid stream is set a rickety narrow collection of logs and sticks over which we leapt and bounded, plunging on the further side into the stream beyond and on up a high steep bank. We and Maj T succeeded, not so Gray and Babs whose motor refused and stuck midway. However eventually whilst we watched they bounded clear and to my relief reached safety. We then lunched and here we sit at Voi where we spend the night. 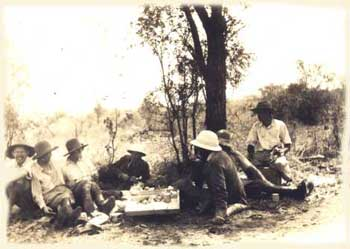 Sept 12th
Leaving Voi at about 8 we arrived at Mombasa without let or hindrance at 5. The road was rough, at parts very rough, and the last part from Kwale onwards through very big country, steep hills and hairpin bends. At one place we had to cross a long narrow rickety bridge, the performance did not please me. The scenery was lovely, huge forest trees and as we neared Mombasa the ubiquitous Baobab appeared, that strangely malformed effort of nature. The last lap was a ferry upon which the cars were conveyed across to the island and there we all assembled at the Manor Hotel, much improved to five years ago, and ate our first fish, a very great treat. 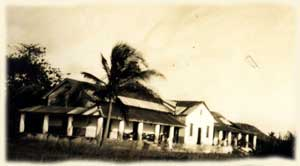 Sept 13th
It has so often been my fate to arrive or depart upon a 13th that I look upon this coincidence as a good omen for here we are at Malindi after a run of close on 700 miles with only 3 punctures, one broken spring leaf and one bent steering rod between the lot of us. We pushed off at 11 and for 70 miles the road to M lies along a narrow leafy lane such as one often finds at Home. We lunched en route by the shady roadside, crossing three more ferries and finding on arrival a large house with ample accommodation for us all. Malindi is a tiny little Arab village with a DC and not much else. We got busy at once and set up our beds and arrangements and scratched together a supper of sorts and so to bed. 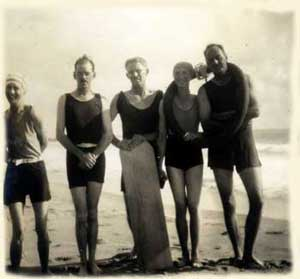 Sept 14th
Our first day being over and having begun to really laze I must write a description of our house and surroundings. Formerly a rubber planter lived here I believe and it is a big barrack of a place with four large bedrooms and one huge dwelling room. Derelict as to its surroundings, it has at the back a grove of palm and mango trees and in front the sea shore and the blessed sea. We have been disporting ourselves naturally – we bathed first before breakfast, again before tea and now all the others have gone to have a third dip before supper. For this meal a la parts of Kenya we get into our night attire and kimonos and are then ready to slip into bed. We went this morning into the little village where an old Arab gave us fruit and coconut milk and after lunch the boys went to his fruit garden and brought back baskets full! 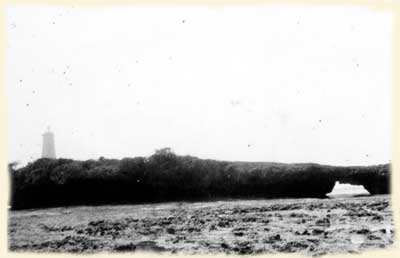 Above is the memorial to Vasco da Gama, who landed on these shores.

They stayed down a month. On Sept 20th they made a memorable visit to the ruins of Gedi: 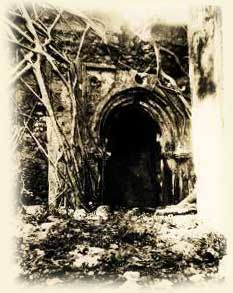 How can I describe an expedition of extraordinary interest on which we have been today. There lies 11 miles out a ruined city called Gedi. Their origin and history is shrouded in mystery and nothing much is known about them. Recently however the British Association has visited them and Prof Fleure in the E. A Standard wrote a brief account of the occasion, his opinion is that they are of Persian Islamic origin but these are the only facts one can come by. The city walls are supposed to be some 5 or 6 miles in circumference and the population judging from the mass of buildings and the immense wells must have been very numerous. Paths wind in and out but the forest and jungle have claimed their own and over all and in and through all the immense trees have cast a stranglehold. The place is full of the spirits of the past and one wonders what the age old history of it all was. 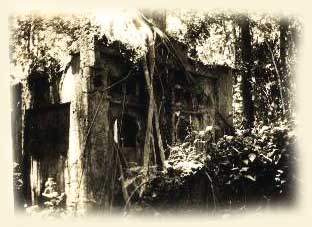