A prisoner in Germany.

Philip Lyster was an old army friend of Wynne’s, and by the war was a Major in the Royal Field Artillery. Wynne was 20 years younger than Herbert, and liked to flirt with all the young army officers, something Herbert apparently condoned, according to his daughter. It was all pretty innocent, but it meant she could be escorted and spoiled by them all, much to her delight. It was probably nice for them too, these officers who by tradition did not marry young, and usually then only with the Colonel’s permission!

As a regular army officer, he was in France from the outset. Lyster was captured almost immediately and became a prisoner of war. You can follow his story via the links below if you want to, rather than having to go through the whole diary.  He makes his first appearance (as PGL) when the family are in Ireland, so presumably had met them before that, possibly in Aldershot or even Woolwich.

1905
Philip arrives in Kildare for a visit, and later has to be hospitalised with appendicitis in February.

1908
They enjoy London, and visit theatres together.

1912
In February 1912  she mentions the 1908 meeting while talking about another man who is escorting her four years later.  They clearly stayed in touch during this period, and thereafter throughout the war.

1914
His POW story starts in October 1914. He sent Wynne a card from Bruckenkopf, Torgau – just north of Leipzig, and probably a pretty bleak place.

1915
We hear from him again in 1915, twice, first in February, and then in November. In February we simply have an envelope, which had been all over the place as Philip had been moved, and was now at Magdeburg. In November, she includes a newspaper article, which featured Lyster.
Sadly, there is no article with it, and indeed there may never have been as I am sure Wynne would have stuck it in – how the photo came to be printed in an UK paper and who took it is unknown.

1916
In 1916 he appears only once, in January, with a brief New Year message on a POW card. The card was stuck in as an interesting memento, but Wynne does not mention him. 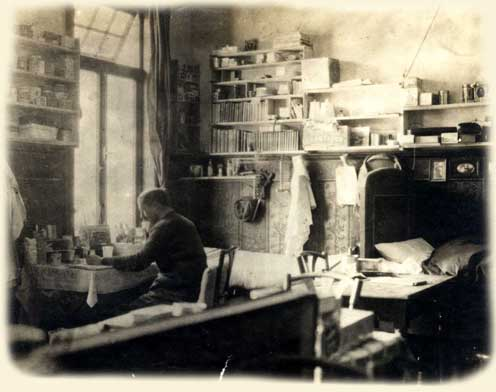 1917
Four mentions:
January – a beautifully hand-written postcard, from Clausthal. We start to learn a bit more from this about his condition (and about Xmas).
February – a letter and photo – a detailed description of daily life in the camp.
April – another card, this time with interesting censorship marks all over it – camp Amateur Dramatics.
October – another card, and this time the first mention of a possible negotiated release of Allied prisoners to a neutral country. This in fact happened in 1918, and Philip was lucky enough to be a part of the group so released.

1918
In 1918 Lyster’s ordeal begins to come to an end, with this extraordinary negotiated release. You can read a long letter about it in the January entry.
January – he writes about the developments surrounding his transfer to the Hague, in Holland, from a German POW camp.
July 23rd – this time a diary entry, with the surprising news that Lyster is to be married. He cannot leave the Hague so his bride must travel to him!
August – another mention, and the wedding details, including the card for the church service.

1919
There are three mentions.
January, Lyster is back in the army, and working again (Jan 21st)
March, and finally, Wynne and he meet up in London to try and relive old times by doing a theatre, but it doesn’t sound quite like it did in 1908.
In May, he is able to come and visit them in Somerset, and he spends several weekends with the family.

These are all very bald, short little entries. One longs to know more, and particularly to know how the whole affair affected Lyster. Did he survive into old age, did he have a family, and what did he really think about it all?

This is an enlargement of the photo above, to show you some of the details of his life. Although it looks a bit cramped (note the two beds in shot), he appears to have been allowed a number of luxuries, like books etc. Note the saw, which must have been for cutting wood to keep the fires burning, and also little details like shaving brush, hot water bottle, and boxes presumably containing food and perhaps items sent from home. You can read a full description of life in this camp if you link to February 1917. 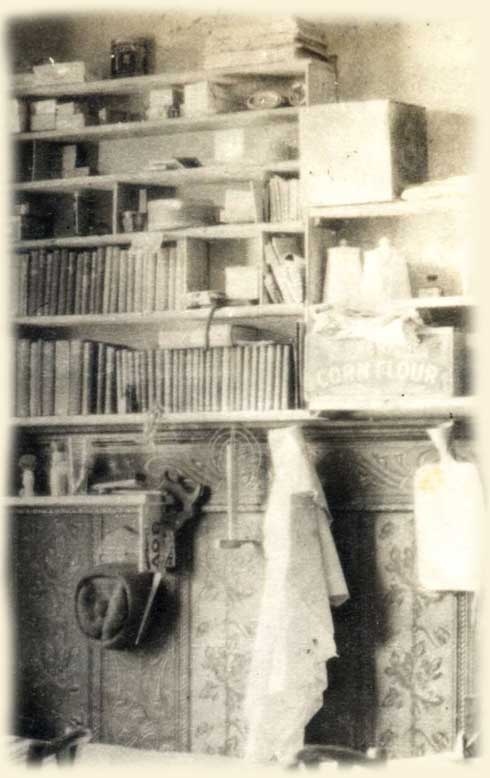