When Wynne began her diary in 1895 her parents were away in India, and for some reason they had their presents on December 24th, so Christmas Day sounded very dull…though perhaps not as dull as twenty-first century television.

December 24th, Tuesday
Our Xmas tree came off this night, it was fun. I had 20 presents among which was the sweetest ring which Gran gave me, all the Hightons came, and we took everything off the tree at the end.
(None of this decorating the house in October and leaving things up until January!!).

December 25, 1895
This seems very like Sunday as we went to church this morning – we were again tortured by a most frightful new hymn which I didn’t know a bit so sang La La to it!! at which Yso (her cousin – the Y.O.B. depicted on the first page of the first book, along with her sister Eva and a very aggressive looking Miss Scratchley, who was the governess) caught me. At our dinner we had Mr Highton (the vicar) who was very mournful. (From the pudding) Yso got the thimble and ring, I the button, Elliot (her brother) 6d, monkey and beer jug, which looks bad. After dinner we had some songs which was all – this has been the dullest Xmas evening I know.

…but Christmas on the whole was a time of much rejoicing and hard work, involving the whole household. Unlike today, no decorations were hung until the last minute, and the actual tree with real candles was not decorated until Christmas Day, or as this year, Christmas Eve. It was necessarily a brief occasion, since the candles burnt down, but a very brilliant one that all who participated never seemed to forget. The magic of real candles and the fact that it was such a brief and brilliant occasion added to the aura, something perhaps we have lost in the modern bombardment of light and sound, commencing as it does in October.

In 1901 Wynne was a newly married young woman living at 53 The Common, Woolwich. She was clearly too busy to write about it, and only really recommenced her writing in January of 1902, but the Christmases that came later were more elaborate affairs to the ones that she noted in India in 1898 or in England in 1900…

December 25, 1898
…made as much noise as possible and ragged a great deal, drank numerous healths, absent friends and individual ones, all felt a little sad because of reminiscences but tried our best to drive away blues.

On Monday night the English Mail came in and it was a most exciting minute. I had a very nice day hearing from most of the people I expected to, I had a letter from C.W.M. (Charles – see Love) who it appears is getting on quite well and having a good time I am so intensely glad as I was desperately afraid he would bother himself over our unfortunate affair d’amore. He wrote quite cheerily, perhaps rather bitterly and mentioned that he couldn’t understand how Mother could possibly say he had “taken advantage of her kindness” – now who had kindly been poisoning his mind still further goodness only knows, someone wishing to do one a good turn I suppose.

December 25, 1900
..it seems so odd to have done with 1800 for ever…I must try and write a little about Xmas. On Xmas night the Westons came to dinner and we had chaste music. All this autumn and winter the (Boer) War has been terribly in people’s minds – one hardly thinks speaks talks or reads of anything else, the horrors and sadness is fearful and this Xmas must have been a sad time for many. 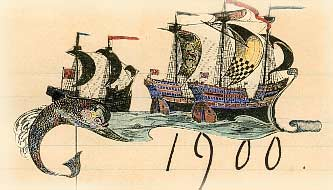