Wynne and the Boer War… 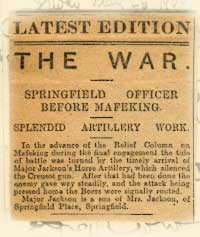 Wynne’s opinions were both conventional and rather narrow, as you would expect from someone living in the way she did. Her attitude to the war was influenced both by gleanings from newspapers and magazines, and by news from her relations serving at the front. Newpapers were very important. We are now used to getting instant information, but in 1900 Wynne had to rely on the daily paper to tell her if a boat carrying a loved one had arrived in port, or if someone was in action in a battle. She frequently had to wait weeks for confirmation of events to arrive by post and so the diaries contain clippings announcing boat arrivals or battle successes as they appeared in her paper. Here is her analysis of the war, which seems to have been taken from a publication that relied solely on extracts from the Times. The entry starts with a clipping from her daily paper announcing the arrival of her brother’s ship at Cape Town – you can see what the page looks like below: 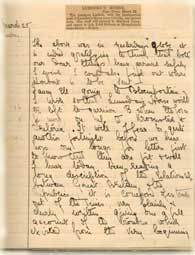 March 25th 1900
The above was in yesterdays “Globe” (the cutting reads: Lumsden’s Horse, Cape Town, March 22nd. The transport Lindula, with the headquarters staff of Lumsden’s Horse from Calcutta, has arrived here….). It is indeed gratifying to think that both our dear things (her fiancé and her husband) have arrived safely. I wish I could also find out where Herbert is to be sent. Fancy Ell going to Bloemfontein. I wish so that Lumsden’s Horse will be left to garrison B when the force move on up to Kroonstad and Pretoria. It will I fear be quite another fortnight before we hear, how one longs for letters just to know that they are fit and well. I have today been reading a long description of the relationship between Great Britain and the Republics, it is composed of extracts out of the Times, very plainly and clearly written giving one a full account of the troubles which existed from the very beginning commencing with the abolition of slavery in 1839 and continuing with an account of how in 1877 the native tribes rose owing to the Boer persecution, and not being able to stand against them they (ie: the Boers) decided to ask Great Britain to annex their territory and fight their battles for them which we did. They benefitted by the arrangement in the way their financial affairs improved etc…after this in 1879 the Zulu war occurred which cost us £2,000,000. When we had settled them and all their affairs generally they wanted their independence back again, this we granted under certain conditions, viz: that equality should be granted to all white races, that trade and commerce should continue, that no treatise (sic) should be made with foreign powers and that no extension of territory tried for. Ever since then trouble has been rife, every item of the agreement was at one time or another broken and 100s of natives were forced to become “apprentices” as they were termed and terrible cruelty was practised. At last negotiations were entered upon and as terms could not be settled between us it ended in this fearful war to which one sees no end.
Below is an extract out of this morning’s Globe just as an example of what a little of the foreign press comments on the subject are. It is really more laughable than anything else. To begin with I should think it extremely unlikely that the Prince would go to the Exhibition after the insults they have heaped upon the Queen and the Country. 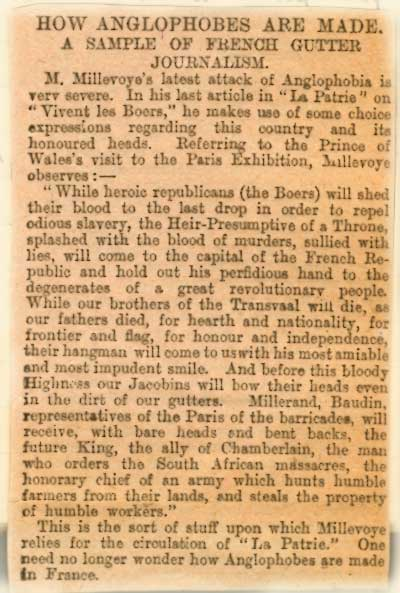 (Check out a real history of this conflict, a clash that was the result of over two centuries of conflict between the Dutch immigrants to southern Africa, and the expanding British empire. You will find a very different version of the events of 1877 and its aftermath. The First Boer War of 1881 has no mention above. It culminated in a famous Boer victory at Majuba, and led to the restoration of independence for the Transvaal. And notice too that one of the most important underlying causes of the war, the expansion of the diamond and gold fields which all lay in Boer territory, is not mentioned at all.
The war, begun on 11 October 1899, gave the British a very bloody nose. It was the longest and the costliest war fought between 1815 and 1914, and it was very bloody. When it was over, 22,000 British, 25,000 Boer, and 12,000 African lives had been lost. The shock it administered to the nation can be seen in the number of memorials that sprang up – memorials that were soon to be swamped by those of the First World War, but nevertheless a very tangible example of what people felt at the time.
Although couched in aggressively propagandist tones, the extract from the French journalist has a strong element of truth in it. The Boers were fighting for something that the Europeans, particularly the French republicans, understood and sympathised with. Britain found herself temporarily very isolated).

April 8th 1900
These cuttings I got out of the King, some of them are awfully good.
(This is the characteristic British response to the foreign press attacks. Each verse is a tongue-in-cheek imagined comment from someone in the enemy camp – soldier, general, diplomat – but of course couched in such a way as to make the original propagandist patently ridiculous. Dr Leyds was the Boer envoy in Brussels, and he organised a brilliant propaganda campaign that increased the anti-British outpourings in the European press. Some of the stories were absurd – echoes of what was to come in the next war – but the fact of the matter was that some of this did touch a nerve. Britain was not used to being cast in the role of plunderer and pillager – still less in the role of murderer, a role she appeared to fill when news of the Kitchener concentration camps got out.)

From the Boer rank and file:-
Each British soldier, as we glean,
Has been presented by the Queen
with bits of rag for private use
As simulated flags of truce.
The rags arrived, we blush to state,
In packets labelled ‘chocolate’.

From General Joubert:-
No British soldier I have met
Could face the Dopper bayonet;
he also groans and looks askance
At any mention of a lance.
The British soldier cannot fight
Unless entrenched upon a height;
And when our men commence to scale
You quickly find him turning tail.

From Commander Cronje:
the British lack the slightest sense
Of that refining influence
Which teaches courtesy to those
Who may communicate as foes.

From Dr Leyds:
My wonted energy supplies
the following important information:
Lord Roberts in a recent chat,
Has secretly informed me that
Reports about his boundless pluck
Are one and all confounded truck;
He told me in my private ear
A mouse could make him yell with fear;
And as for Kitchener, it seems
When people mention war he screams.
Lord Roberts said that he and K
Are both of them in Russian pay;
He also told me he had been
Instructed slyly by the Queen
To burn the wounded that survive
And skin the prisoners alive.”

From M. de Cassagnac:
The British – that’s their tender spot –
Are such a wild, excited lot!
When things are just a little bad
You find the Briton raving mad;
He gasps and dances, quite dismayed,
And shrieks in fury, “I’m betrayed!”

(The war is also covered in Love, Herbert – the story of her engagement and marriage. Her wedding was delayed because of it. You can read there about the relief of Mafeking).