Wynne and the death of Kings…

This is Wynne’s version of the news of the death of Edward VII. If you scroll to the bottom of the page you will find links to Queen Victoria’s Diamond Jubilee, Edward VII’s coronation, and the June celebrations in 1911 for the coronation of George V.

But first, a personal reaction to the death of the monarch.

May 7th, 1910. Saturday.
This morning as I sat at breakfast Mrs Pharo brought in the Morning Post which I noticed was all black lined and on opening it found to my horror that the King was dead – I can’t remember ever having had such a shock – the day before I had read that he was suffering from an attack of bronchitis and that it was causing “some anxiety”. It was only a little notice and said that owing to his indisposition he was unable to meet the Queen that afternoon on her return from her tour abroad – so that when one read today that at 11.45 Friday night he died one could scarcely believe ones eyes. It is a most fearful calamity and the loss to the nation at this critical time cannot be over estimated, to say nothing of the individual loss everyone feels personally, he was a great king. 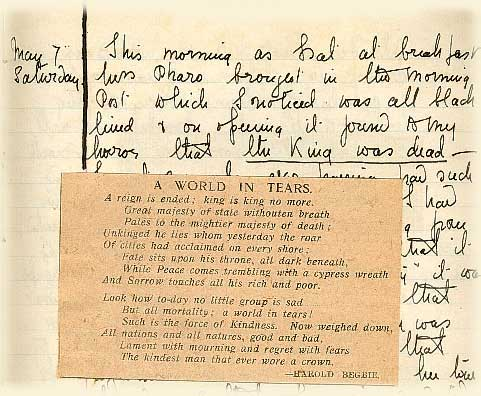 May 8th, Sunday
Already almost everyone one sees is dressed in black. I have only seen 2 articles of colour today and they looked quite odd, I suppose it will be a case of mourning for 3 months. How terribly he will be missed when in these troublous times his wise counsel is so much needed, with the nation in the hands of the present feather-brained and unscrupulous politicians, one wonders indeed what will happen and whether our next King will be strong enough to cope with it all, a most unenviable position. One longs for the paper tomorrow to hear more details of the end, it is all too sudden to realize, no one had any warning and it has come as a fearful shock. We didn’t go to church today as we are still afraid of spreading whooping cough, but I think soon it will be all right.
Wynne then moved house, to Upton Lodge in Farnham, and wrote the next entries mainly about the move and her enjoyment in having her own hearth again. The family travelled to Chelmsford to stay with Herbert’s mother for a day or two, and then on May 17th, the great events intruded again…

May 17th, Tuesday
Today the King has been removed to Westminster Hall for the public lying in state, I can imagine the vast crowds and the impressive service and procession from Buckingham Palace. It seemed so odd last Sunday praying for King George V and Queen Mary. Spent my day charring and drove after tea to the Town on shopping errands. There seem so many odds and ends to get when one moves.

May 19th
I have had a strenuous day today, starting at 9.20 I went up to Town to attend Mabel’s Dismissal Service (Mabel was Wynne’s sister-in-law, and this service was prior to her going out to Africa as a missionary) and also the Lying in State of our King. On arrival I tubed to Oxford Circus and went down to the Kodak Co. where I bought a camera for Mabel and several necessities for myself in that line. I then taxied to King and Co with a letter to Ell about meeting at Naples on the 1st (she was arranging her holiday in Italy, which you can read about in Travel), and on to the S.P.G. Chapel beyond Westminster, where I was in good time and met a whole concourse or relations and friends of the family assembled to attend the service. It was very nice and I wished H had been able to come too, one could hardly realize as one knelt in the peace of that little sanctum the enormous mass of seething humanity without. When the service was over 10 of us repaired to Westminster Palace Hotel where we all lunched and then 8 of us determined with much courage to find the end of the queue for the Lying in State. This we did in hansoms at the end of Chelsea Bridge where we valiantly settled down to join it. I shall never forget this extraordinary experience, we found ourselves in a strange and mixed company, ladies, gentlemen, Londoners and country folk, working men, factory girls, people old and young and not a few tiny children. Hour after hour we continued our slow and painfully hot tramp being pressed on the way to buy for a 1d lemonade, oranges, bananas, chocolate and funeral badges, every now and then for some reason or other a short open space would occur and then we would pick up our skirts and fly running along like a flock of frightened sheep but for the most part our march continued very very slowly with frequent long stoppages. At length after three hours we reached St. Stephen’s door of the Hall and mounted a long flight of steps from the top of which one paused a moment to try and take in the wonderful scene which came into sight below us, the Hall dimly lit with immense candelabras was filled with a dust-ladened atmosphere caused by the thousands that passed along and in the centre, railed off, stood the coffin covered with a gold fringed white silk catafalque and guarded by the absolutely motionless figures of “beefeaters” and a Gurka at the head whilst at the sides and end stood the gorgeous body guard. The coffin was surrounded by the most beautiful wreaths and on the top lay the crown, garter, orb and sceptre, the whole scene might have been cut out of stone and the silence was oppressive, a most wonderful sight and one which one will never forget. One simply couldn’t realize that our beloved King was lying there, he who a fortnight ago was so full of life, but they say it is hard work and the nations’ burden which has killed him.

May 20th, Friday. The King’s Funeral.
Very early in the morning at 3.10 to be precise we rose and in the grey light hastily put on our clothes, breakfasting off boiled eggs. We started off at 4.15 in a cab and as we neared the station to catch the 4.49 the dawn broke and the sun rose like a great golden ball, it was a most perfect morning, still, warm and fresh, the grass all dew spangled and the scenery of young birds and fresh spring green casting their long shadows over the silver grass was just as perfect as it was possible to imagine – it all looked so still and peaceful one could not realize the hurrying and restless crowd coming from all parts of the country to do honour to the dead King. By the time we reached Waterloo one realized it forcibly enough, there the place was thronged with hundreds of people hurrying to and fro and hastening to get to their seats before the thoroughfares were closed to them. We went by tube to Edgware Road and from there walked to Oxford Terrace, the whole place was like a disturbed beehive but by 7.30 we were in our seats which thank goodness were on the shady side of the street – those opposite had the full sun on them the whole morning and the poor ones on the pavement who had taken up their position since the early hours felt it dreadfully, the ambulance men had a busy time for many men and women had to be carried away fainting to some spot where aid was administered. At length after 3 hours waiting one realized by the sudden hush that the procession drew near.
Headed by an officer of the headquarters staff it slowly approached, and after various units had passed the coffin came in sight drawn by 8 horses of the BB Battery, draped with a silken union jack and on it the crown and regalia, it was followed by the charger whose stirrups held the reversed boots and the most pathetic touch was the King’s little dog led by a Highlander. Then came King George, on his right the Kaiser, and his left the Duke of Connaught and immediately behind them seven other Kings, such a concourse as one had never before seen, followed by all the Foreign representatives. One’s sympathy went out to the poor Queen Mother (Queen Alexandra) whose coach was the first of a long line of gorgeous gilded state coaches and in the one directly behind her sat the Queen and her two children, the eldest boy Duke of Cornwall and the little Princess, but all the royal ladies were so closely veiled in mourning that one hardly saw them. The massed bands played Chopin’s Funeral March which added to the general air of solemnity and awe, the streets all decorated with purple, black and white and thronged with a seething mass of black-robed humanity presented an extraordinary sight. The crowds were most wonderfully orderly and well behaved and the Police exercised the greatest possible patience. We got away as soon as possible and found Herbert’s uniform a very great help acting as it did as a pass into thoroughfares where the populace had not then been allowed to go, we went and had lunch at my club which revived and refreshed us and tea time saw us home again.

(A long period of mourning followed – as you can see from the invitation Wynne received in July – envelopes still black-edged). 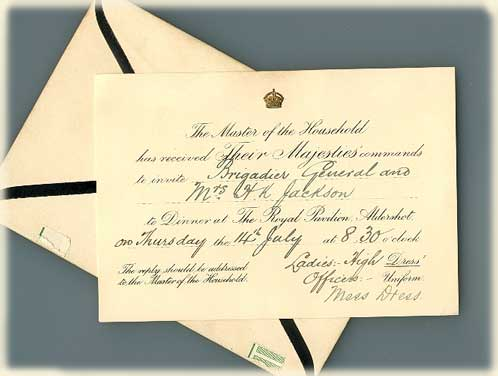 So now, if you found this of interest, you can follow Wynne’s reactions to:

Edward VII’s illness, causing the postponement of the 1902 Coronation.