Thomas never married, and continued to live in Kenya until the end of his life.

Ysobel married Albert William Symes in 1933, and you can see them below on their wedding day.

They came to live in Suffolk until 1938 when they decided they both wanted to go back to Kenya. They sold up, and moved to a farm in the Trans Nzoia district, where Thomas was living. They had four children:
Max Elliot, born in 1935
Patricia Rosemary, born in 1937
Veronica Winifred, born in 1939
Peter Alan, born in 1946.

The whole family eventually left Kenya. With the exception of Patricia, who decided to move to Australia, they all returned to live in the UK. 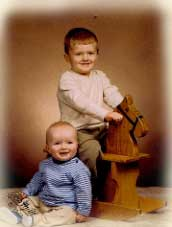 Max married Adrienne Brownhill in 1960, and they had one son. After Adrienne’s death from cancer, he married again, Pamela Spicer.

Patricia married Michael Collins, and had one son, Bruce.  Bruce is now married to Micci, and they have one daughter, Scarlett 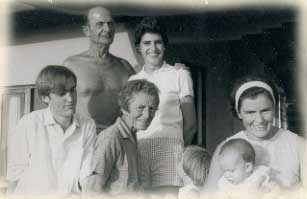 Some of the family in 1967: from the left – Peter, Bill, Ysobel, Patricia, and Veronica with her two daughters, Ruth and Jane

Wynne’s children are now all dead:
Thomas was murdered in Kenya in 1968 by a thief who broke into his isolated house in the middle of the night.
Eleanore died next, in 1975, also in Kenya.
Ysobel died in England, where she had returned to live, in 1991.